Couple of things we should point out here. Firstly, when we say ‘get off the beaten track’ we’re not trying to boss you about; it’s more of a helpful suggestion than an order. Secondly, nor are we saying that you should go completely ‘off-map’ and try to invent your own high-altitude trek on a previously unclimbed Himalayan mountain. We’re ‘Kandoo Adventures’, not ‘Kandoo Complete Nutters’ and nothing is more important than your personal safety when trekking.

That said, we know that trekkers can be a daredevil bunch who often seek their thrills on less-travelled or more challenging routes away from the mainstream. Those are the kinda treks we’re talking about when we suggest getting off the beaten track. And as long as you have a pioneering spirit, are fit enough to trek a fair old distance before your legs go a bit wobbly, and already feel the urge to pull on your boots and get going, then have we got treks for you! (Yes).

We can tell you about loads of amazing high altitude treks that will get you off the beaten track (go on, ask us) but to put you in the picture, here’s our pick of five faves. 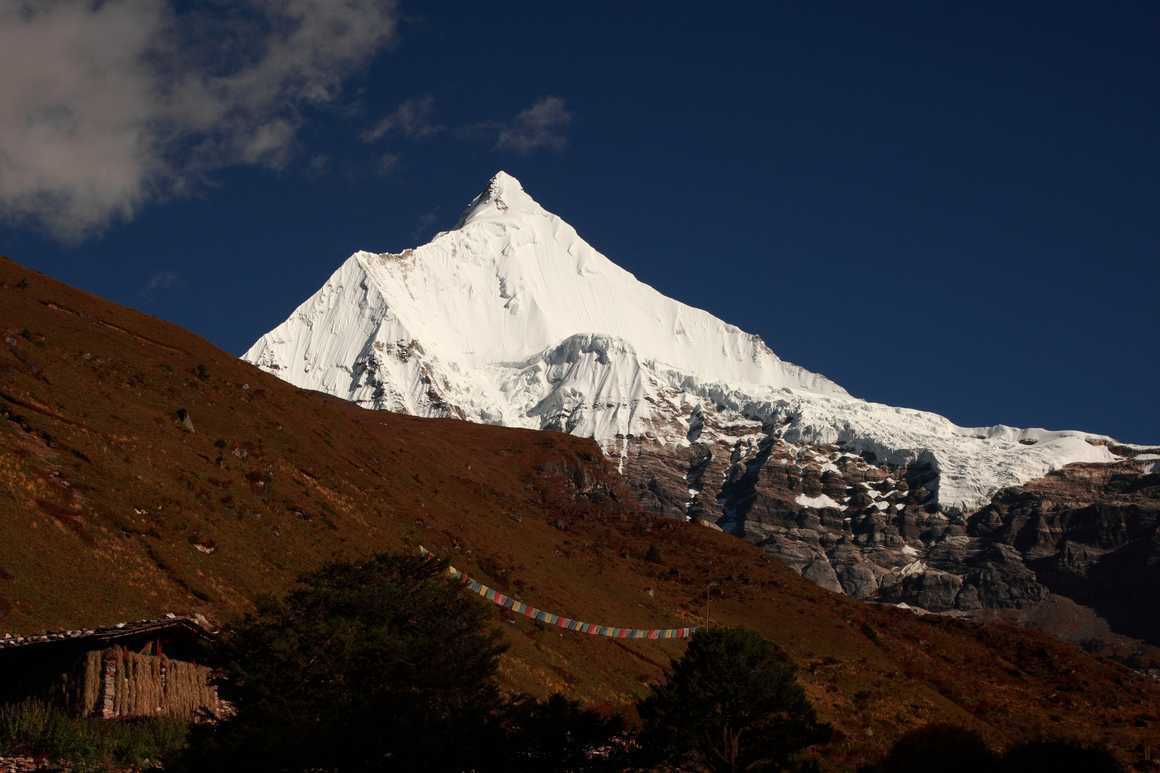 Depending on who you talk to, this may or may not be the toughest high altitude trek in Bhutan. One thing you can definitely say for sure, though, is that it gets you off the beaten track. This not-so-little beauty is gonna take at least three weeks of your time, and you’ll need to be in tip-top condition in terms of strength, fitness and stamina.

Traversing the backbone of the Himalaya Mountains that lie close to Bhutan’s northern border with Tibet, you’re going to hit the (literally) giddy heights of 5,300 meters altitude, cross around a dozen spectacular high mountain passes and yomp your way through some of the most remote-but-inhabited places on earth. This ain’t the Inca Trail, so crowds of trekkers are in short supply here (by which we mean there are NO crowds of trekkers here) In fact, only a small bunch of intrepid trekkers take on the Snowman trek each year, so you’ll pretty much have the place – and what a place! – to yourself.
To sum up, then, if you want a tough but rewarding get-away-from-it-all trekking adventure of a lifetime, the Snowman ticks all the right boxes. Majestic solitude: check. Indescribably stunning mountain scenery: check. Remote villages: check. Some pretty damned knackering ascents and descents: check. Best sort of shirt to wear? Check. Sorry, couldn’t resist that last one. 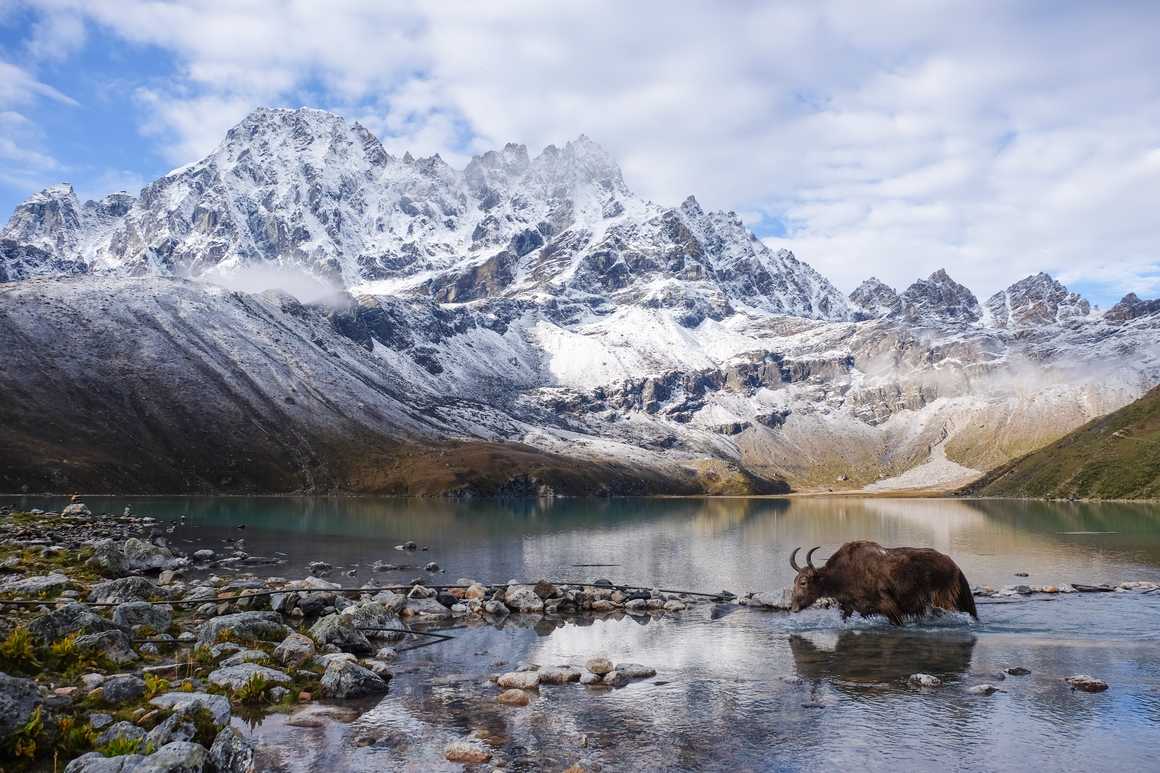 OK, so what’s the big deal here? It’s actually 19 big deals: the Gokyo Lakes which sit at elevations ranging from 4,700 meters to 5,000 meters above sea level in Nepal’s Sagarmatha National Park. Not only are these lakes among the highest freshwater lakes in the world, they’re also mind-bogglingly beautiful to visit, not least because they’re back-dropped by a panorama of pristine snow-dusted mountains. Trust us, your camera trigger-finger is going to look like Arnold Schwarzenegger by the time you’ve finished taking photos of this place. But I digress.

Another great thing about the Everest Base Camp and Gokyo Lakes trek is that it very few other people actually divert onto it. Divert onto it from what? Well, you see, the thing is that the Gokyo Lakes aren’t the most famous attraction in Sagarmatha National Park. No: that would be, erm… Mount Everest.

So you begin this moderately taxing 17-day high altitude trek by following the route that ultimately leads to the legendary Everest Base Camp. Just after the town of Namche though, you – wait for it! – get off the beaten track to Everest Base Camp and continue instead towards the beautiful turquoise waters of the Lakes.

That’s not all; if you’re up to it (of course you are) you can climb to the summit of Gokyo Ri at an altitude of about 5,360 meters to discover, to your astonishment, that it’s possible to find even better panoramic views up here. Word to the wise: bring spare camera batteries and a second memory card, y’know, just in case. 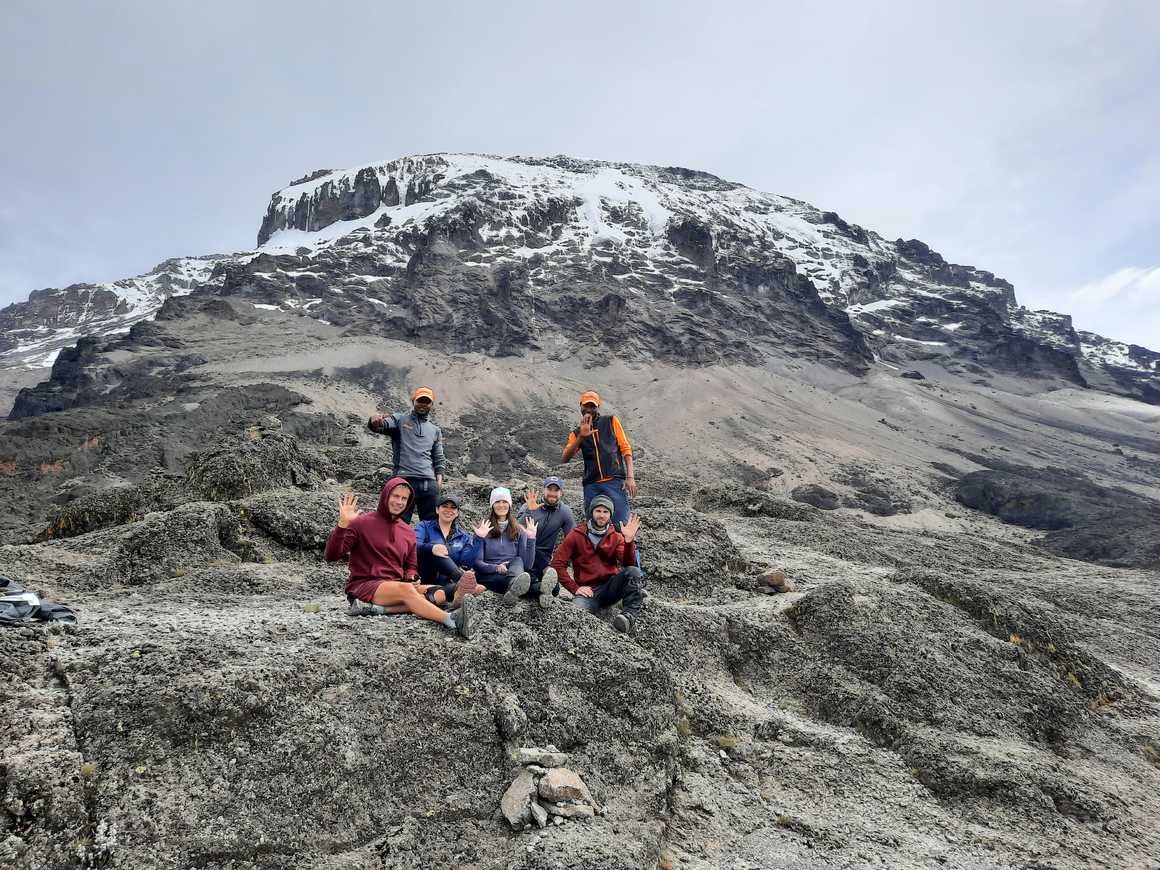 Lots of people want to climb Mount Kilimanjaro (why wouldn’t you? It’s a challenging but utterly fab trek) and there are various routes by which you can do it. The most popular among these are the Marungu and Machame routes, and it’s fair to say that if trekking in solitude is your bag these probably aren’t your best option unless you fancy chancing a climb during the rainy season.

Shhhh. Keep it under your hat, but there’s an alternative and altogether quieter way to go that takes you, err, off the beaten track. The Northern circuit  is Kilimanjaro’s newest ascent and although it begins by following the popular Lemosho route, it sneakily detours you off around the mountain to the less-traversed northern slopes. Taking nine days, the Northern Circuit gives you that bit longer to acclimatize and take in Kilimanjaro’s gorgeousness. Don’t knock it – that extra time also means that this particular route is safer and offers a better chance of success than some of the others.

To sum up, Kilimanjaro’s Northern Circuit gives you more to enjoy, fewer folk to distract you and all of the sheer natural beauty and challenging terrain that you crave. And if that doesn’t tickle your Tanzanian trekking-buds then we don’t know what will.

When we talk about trekking to Peru’s fabled ancient Inca citadel Machu Picchu, it’s fair to say that the Inca Trail is a beaten track. As high altitude treks go, the Inca Trail is beautiful, challenging and very, very popular. You want to trek to Machu Picchu off the beaten track? There is… another way.
The four-day Salkantay trek  begins about 80 kilometers to the northwest of Cusco in the Cordillera Vilcabamba mountain range, dominated by Salkantay (it means ‘Savage Mountain’) itself. Now, keep it to yourself, but some folk reckon that whilst the Salkantay Trail is a teensy bit trickier than the Inca Trail it’s also – gasp! – more spectacular. And a lot less crowded.

What makes it so good? Well, for starters there’s the sheer bloomin’ diversity of the landscapes you’ll pass through; one minute it’s stark glacier-topped mountains, the next it’s the sort of lush tropical rainforest in which you’d expect to find Indiana Jones dodging blowpipe darts. But then the Salkantay Trek is littered with highlights; literally high in the case of the magnificent Salkantay Pass which scrapes the sky at an altitude of 4,650 meters.

So, apart from being relatively other-trekker-free, this lesser-trodden trail is an absolute gem for cultural experiences, natural beauty, alternating landscapes and sensational views. Some say the Salkantay trek is difficult; but 'difficulty’ is a subjective measure. Experienced and acclimatized high-altitude trekkers will find that it’s just their cup of mate de coca; and let’s not forget that this mega-experience culminates with your arrival at one of the most legendary locations on earth: Machu Picchu. Boom!

From Peru to Meru. That’s Mount Meru in Tanzania’s Arusha National Park. Mount Meru is Africa’s fifth highest peak and stands 4,566 meters high. Nothing shameful in that, but unfortunately poor Meru stands in the shadow of his considerably more popular big brother: Kilimanjaro. Not so unfortunate for the high altitude trekker who wants to get off the beaten track (that’s the theme of this post, remember)?

Mount Meru offers a fantastic trek in its own right and you won’t find too many other folk doing it at the same time, unlike the Big K next door. You can do the trek there and back in four days, but be warned – Mount Meru is no pushover. In fact, if you’re sufficiently rock it makes a great warm-up trek for tackling Kilimanjaro. There are definite bonuses to straying from the crowd to trek Mount Meru; the forested lower slopes of this inactive volcano offer fab opportunities for wildlife spotting. Everyone loves an encounter with a wild giraffe, don’t they? Oh well, suit yourself.

Even if Africa’s animals don’t float your boat you’re bound to be chuffed by the dramatic scenery here: think lowland forest, ash-covered open plains, rocky escarpments, mountain rivers and cascading waterfalls. Meru has the lot, plus gob-smacking sunrises and sunsets and, during the clear (very chilly) nights, scintillating star-scapes.  With high-altitude treks as good as this that you can keep all to yourself, who the hell wants to be ‘in with the in crowd’ anyway?