No matter how many guide books you’ve read, pictures you’ve seen or trekkers who’ve been there you speak to, nothing can diminish the exhilaration of seeing Machu Picchu for yourself. Situated in the Cusco region of southern Peru this legendary Inca citadel, established in the mid-fifteenth century but abandoned during Spain’s conquest of the Inca empire a century later, remains one of the most exciting and mysterious destinations on earth.

Getting to Machu Picchu can be an adventure in its own right; surrounded by forest and wilderness, the magnificently preserved citadel nestles in a dip between the imposing mountains of Machu Picchu (‘old peak’) and Huayna Picchu (‘young peak’) at an elevation of over 2,400 metres.

Once there, though, you’ll have the opportunity to marvel at and explore this spectacular Incan settlement and be awed the natural beauty of the scenery that surrounds it. If your time at Machu Picchu is limited to just a few hours you may struggle to see everything, so here are our suggestions for the top 10 things to see and do at Machu Picchu.

Climbing Huayna Picchu is a "must do" to get the best aerial view of the city of Machu Picchu 360 metres below.  Permits have to be pre-booked as the numbers allowed to climb are limited.

Intially it looks like an impossibility to be able to scale the sheer rock faces of Huayna Picchu but once you start you will see that narrow paths, steep steps and even, at times, ropes will lead you all the way to the top.  Most people head straight for the top but don't forget to check out The Temple of the Moon located in the Great Cavern, just a short diversion from the start of the climb.

Passing through the main entrance to the Machu Picchu settlement at the end of the Inca Trail, one of the first notable structures you’ll encounter is a set of sixteen interconnected ceremonial baths. Water runs through stone spouts and fountains fed by natural springs and the terraced baths are served by their own dedicated stone stairway.

Temple of the Sun

Ascending the staircase from the Ceremonial Baths and turning left will bring you to the Temple of the Sun. This building is unique in Machu Picchu and is one of every few buildings in the Inca Empire to feature a curving wall; a testimony to the Incas’ exceptional stone working skills. This temple served both as a sacred space in which to worship Inti, the sun god, and as an observatory; there are two windows in the eastern facing wall of the temple, one is aligned to the sun at Summer Solstice, the other at Winter Solstice. A stone that may have been used for sacrificial purposes can be seen within the temple.

Following a path that leads to the right from the top of the stairs from the Ceremonial Baths leads you through a former quarry site – the source of the citadel’s building materials - to the remarkable Sacred Plaza. This flat, open space is flanked by some of the citadel’s most important structures. Before exploring these it is worth crossing to the far side first, where the Sacred Plaza’s elevated position affords magnificent views of Machu Picchu’s surrounding landscape. 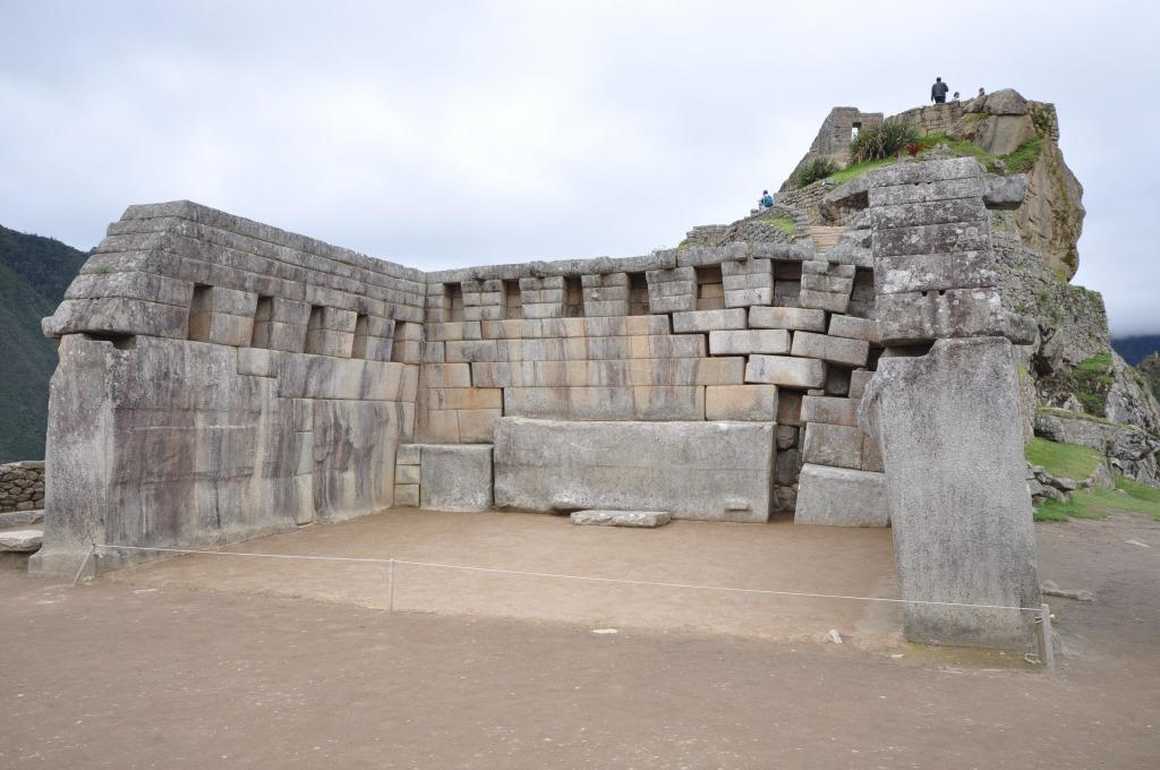 Formed of three four walls, Machu Picchu’s main temple occupies the highest position within the citadel, suggesting that this building was of the greatest religious significance and importance. The Main Temple is accessed from the northern side of the Sacred Plaza, and is constructed from perfectly interlocking stone blocks. Earth tremors and other climactic conditions over the last five centuries have resulted in disturbance of the stones in the north-eastern corner of the Main Temple, but the structure has withstood the test of time better than many of Machu Picchu’s other buildings.

The Sacristry stands adjacent to the Main Temple and is regarded as one of the finest examples of Inca construction in Machu Picchu. Beyond the monolithic carved stones that stand either side of the entrance, the walls of this small building feature a number of carved recesses that look like blocked-in windows. In fact, it is believed that their purpose was to store ceremonial objects and religious ornaments. The Sacristy also features a stone bench.

Temple of the Three Windows

In the southern side of the Sacred Plaza, this aptly-named and impressive temple is distinguished by the three large and evenly-spaced windows in the longest of its three walls. Again signifying the Inca’s reverence for the sun, the windows are orientated such that they are in the perfect position to capture the sunrise. The temple also provides a good view of Machu Picchu’s Central Plaza below.

Tucked away below the Temple of the Sun is a naturally formed cave that has been enhanced with intricate carvings and stonework to create what is believed to have been a mausoleum for Machu Picchu’s royal family, nobility and other citizens of high standing. Unlike other tombs within the citadel, the Royal Tomb has an open entrance and faces east, to be illuminated by the rising sun. Notable features include a split-level stone altar, and a stone carved into three steps; the lowest symbolising death, the middle step representing human life and the top step representing the spiritual plane on which Incan gods exist.

Temple of the Condor

Few examples of Incan stonemasonry can compete with the impressive Temple of the Condor. The condor is a sacred animal in Inca mythology and here, a huge natural rock formation has been painstakingly hewn into the shape of a condor’s wings in flight. In front of this, a further rock on the temple’s floor has been carved to represent the condor’s head and neck. This latter rock may have been used as the altar’s temple.

Behind the Temple of the Condor is a fascinating maze of cells, passages and dungeons; some subterranean and others at ground level. Historians believe that this is Machu Picchu’s prison complex, where citizens accused of crimes and misdemeanours could be held whilst their fates were decided. 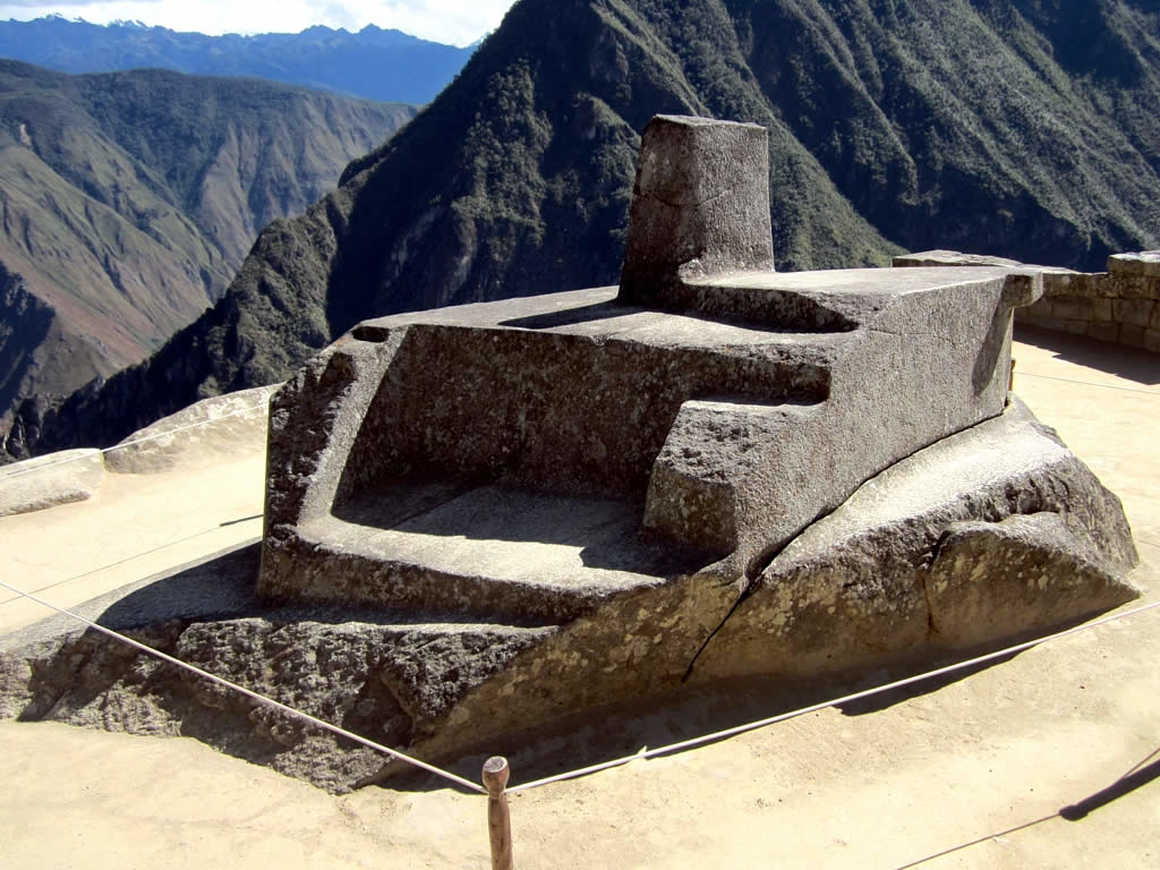 One of Machu Picchu’s most iconic landmarks, the Intihuatana Stone is better known by its loose translation: ‘the Hitching Post of the Sun’. Standing atop the Intihuatana hill, it is thought that this tall and intricately carved stone column was used by the Incas as a kind of astronomical ‘calendar’. Uniquely, at noon on the spring and autumn equinoxes (March 21 and September 21 respectively) the sun’s position directly over Intihuatana means that the column casts no shadow whatsoever. Whether or not you happen to visit the Intihuatana Stone during an equinox, this must-see feature of Macchu Picchu is never less than impressive.