It is believed that Machu Picchu was constructed in the early 1400s as a palace and temple complex for Emperor Pachacuti, who lived between 1438 and 1472 by today's calendar. It's ruins are very well preserved, and an excellent example of the 'classic Incan style' of architecture.

Originally constructed with polished dry-stone walls and thatched roofs. Incan stone work was unique, featuring huge stone blocks carefully ground and shaped to fit together in perfect complex patterns without mortar. The fact that they are still standing in this earthquake-prone region is a testament to the sophistication of the technique.

Machu Picchu was constructed from stone quarried from the site itself, and chippings from the large stones went to form the terraces and courtyards, allowing them to drain off the heavy rainfall they receive without too much erosion.

The site has two primary components: the agricultural sector and the urban sector.

The urban areas are further divided into the upper town or temple district, and the warehouses of the lower town. It has around 200 buildings constructed in wide terraces, centred on a large public square. To the west of this square is a tower called the Torre?n, which was very likely an astronomical observatory (without a telescope, of course).

Also of interest are the Temple of the Sun, the Room of the Three Windows, and the Inti Watana stone. These were all central to the worship of the chief Inca god, Inti, who was associated with the sun.

The Inti Watana, sometimes called 'the Hitching-post of the Sun', is a stone set up to mark the position of the sun at the shortest day of the year, the Winter Solstice. Modern researchers believe the stone is more likely a calendar, much like Britain's Stonehenge.

The Inti Mach'ay is an actual site associated with the worship of Inti at Machu Picchu. It is a carefully constructed artificial cave designed to only receive light for a few days around the winter solstice, when the Royal Feast of the Sun was celebrated. Young nobles would be initiated into manhood by having their ears pierced as the sun rose upon them in the cave. 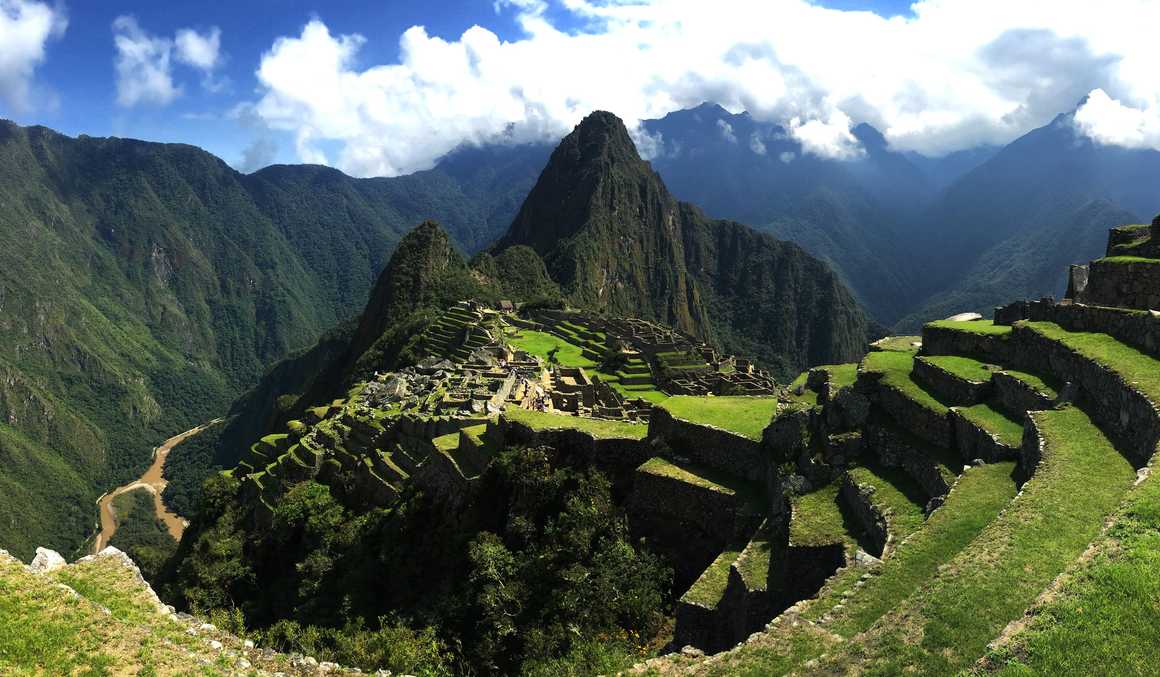 The Inca were primarily ethnic Quechuas, descended from at least two groups of well-developed and quite civilised people, the Chimu and Wari cultures, who had sophisticated urban settlements and wide trade cultures as early as 500AD. In the mid 1400s, the Inca rose quickly from a small, isolated people to the largest empire in pre-Columbian South America. At its height, the Incan empire covered a third of the land in South America, and had a population as high as 16 million.

That empire would prove to be short lived. The empire had only just come out of a civil war where two half-brothers (Atahualpa and Huascar) fought for the throne of their father. The Spanish explorers, already active in the region, had already been responsible for several crippling outbreaks of smallpox, and the Incan empire was in decline. Machu Picchu was abandoned less than 100 years after it was built.

Soon, the Spanish Conquistadors would come to what would later be named Peru. They defeated the weakened Incan forces at the Battle of Cajamarca in 1532, and had control of the entire empire (then known as the Viceroyalty of Peru with its capital in Lima) after taking the stronghold of Vilcabamba in 1572.

Most of the old capital of Cuzco was destroyed, and replaced with new European style buildings in an attempt to replace the older culture and religion entirely. Only the fact that Machu Picchu was already abandoned, and quite hard to reach, spared it the same fate. Records suggest that the Spanish were unaware of the temple complex's existence, though it was well known by nearby villagers up until its 'rediscovery' in 1911.

Though the Incas knew of the wheel, it never became an important tool in their mountainous region. Instead all transportation was on foot, and all goods were carried by men or pack animals. They did have an intricate road system, and it extended to macho Picchu itself. Today the 'Inca Trail' is a large part of the Machu Picchu experience for many trekkers and tourists. The roads are not suitable for vehicles, however, and the only access to the site is on foot, though a tram will take you as far as the foot of the mountain.

The Inca trail itself can be trekked in part, or all at once. The shortest section is the One Day trail, which ends at the Sun Gate on Machu Picchu mountain. The next longest is called the Classic trail. It starts quite a bit farther back before joining the One day, and includes an ascent well above 4000 metres, where the air is quite thin and special care must be taken to avoid AMS (altitude sickness). The longest is the Mollepata trail, which leads onto the Classic and One Day trails in turn. Both of the longer two cross several diverse Andean environments, from alpine tundra to cloud forest, and take you past settlements and ruins as well as through mountain tunnels.

There is some evidence that Europeans may have been aware of Machu Picchu's existence in the mid to late 19th century, but it was not until 1911 that an American named Hiram Bingham publicised it widely, and explored the ruins in depth.

Only in 2007 did Yale University and Peru reach an agreement about the fate of the 400,000 plus artefacts Bingham removed from the site in the early 20th century. Originally, the artefacts were to be returned to Peru by 1917, but Yale retained most of them until 2012, ostensibly because Peru lacked 'the infrastructure to care for them'. The antiquities are almost all housed in the National University of San Antonio Abad Del Cusco's La Casa Concha, Near Cusco's colonial centre.

Peru declared the site a Historical Sanctuary in 1981. Two years later macho Picchu became a UNESCO World Heritage Site. It is now considered one of the 'new seven wonders of the world'. It sees nearly half a million visitors each year, and many are becoming concerned about the impact such high amounts of visitors are having on the site, both in terms of trash and pollution, and actual damage to the structures.

The nearest town, Aguas Calientes has grown explosively due to the tourist traffic, and is the site of a much criticised tramline intended to make the site more accessible. A bridge was recently constructed to allow easier travel across the Vilcanota River, though Peruvian courts ordered that the bridge not be constructed.

As a result of this sudden and potentially damaging popularity, the World Monuments Fund declared Machu Picchu one of the 100 Most Endangered Sites in the World in 2008. As of 2011, only 2500 visitors are allowed to Machu Picchu each day, and no more than 400 are allowed into the citadel itself, and only briefly.

Discover our Peru Travel Guide
Follow us on
Trustpilot
Newsletter