This article provides what we think are the two best seasons to climb Kilimanjaro and what factors to think about in regards to Kilimanjaro weather conditions.
You can also read one of our guides about how to take care of yourself on Kilimanjaro.

Because Kilimanjaro is so high, the weather surrounding it is majorly effected by the interaction of trade winds.

Generally the wettest period on Kilimanjaro is between April and May. This is because the South-east trade winds hit the mountain at this time of year. By travelling over the Indian Ocean, the winds pick up a great deal of moisture that then condenses and turns into clouds and precipitation as it gets forced up the mountain.

If you have to climb during this period then we suggest staying away from the southern slopes as this side of the mountain gets the most rain during these months. A good route option would be the Rongai Route as it takes a trail up the northern side of Kilimanjaro and generally gets less rain.

The driest months on Kilimanjaro are from June through to October. Anti-trade winds blowing in strongly from the North-east carry almost no moisture and force the South-east winds downwards, keeping the mountain relatively free of precipitation and clouds, especially higher up. For these dryer periods we would recommend popular routes like the Machame Route or Lemosho Route.

November sees the beginning of the North-east monsoon period which regularly brings light rains to the north side of Kilimanjaro (see map below).

The best time to climb Kilimanjaro can be separated into two distinct periods - January to March and June to October.

Depending on what your looking for, both trekking seasons offer different benefits. The January to March season is generally colder and there is a far higher chance of encountering snow on the upper reaches of the mountain. Although the cold can put off some people, the benefit of trekking during this period is that there are generally less people on the mountain which can make for a more relaxing journey. If you encounter rain it will usually be on the lower slopes, however, above that the skies are generally crystal clear.

The June to October period offers the best weather but also coincides with summer holidays in both Europe and North America and can often get quite busy!

Unless you enjoy the rain April, May and November should be avoided as these are the wettest months and, therefore, not ideal for the trekking populace. The coldest months are between December and May and snowfall is likely.

The chart below demonstrates the annual snowfall on the summit of Kilimanjaro (in cm). 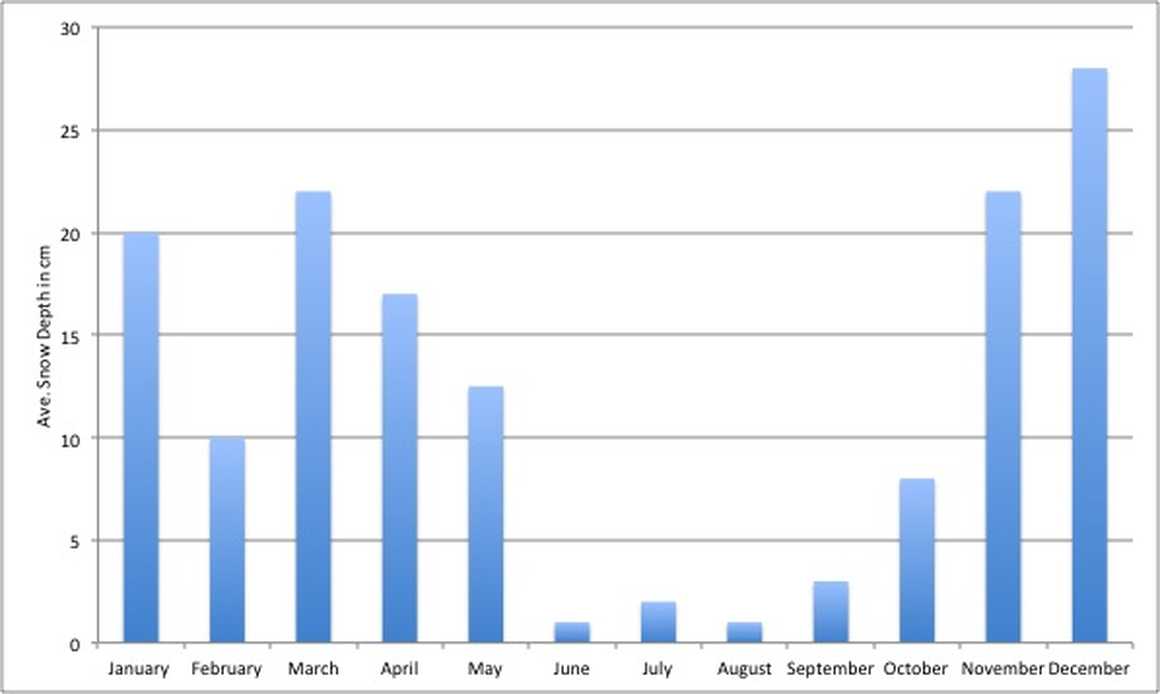 GEAR YOU NEED TO CLIMB KILIMANJARO

Standing almost 6,000 meters in height, Kilimanjaro has its own climate zones and the weather, along with the flora and fauna, changes drastically as you ascend the mountain.

These climate zones can be separated into 4 distinct areas. The first and lowest is the rain forest zone which extends from 800 meters up to 3,000 meters. The zone is warm and humid and attracts a fair amount of rain, especially in the wet season! At 2,800 meters the temperature averages between 12 - 15 degrees Celsius. This zone is where you are most likely to spot animals including the Blue and Colobus monkeys!

The second zone is known as the Low Alpine Area and extends from 3,000 meters to 4,200 meters. This is a semi-arid grassland zone with temperatures averaging between 5 and 10 degrees Celsius. Small shrubs and heather cover much of the landscape and the air is noticeably dyer compared to the humid lower reaches.

The third zone is known as the High Alpine zone. With an arid desert-like landscape, zone three extends from 4,200 meters to 5,000 meters with average temperatures around the freezing point. Temperatures in the day can actually be quite hot whilst at night the temperature plummets, so remember to bring some warm gear and some sunscreen!

The highest area is known as the Glacial zone and the temperature is usually below freezing with an average of -6 degrees Celsius. The area is often covered in snow and the high winds at this altitude make the temperature feel far lower than it is. Glacial silt cover the upper slopes and a number of huge glaciers can be seen from the crater rim of Kilimanjaro. At this height your body is getting half the oxygen it was at ground level, so don't hang around!

Please remember that cold weather effects your body more at higher altitudes as your body is having to counter the effects of altitude in regards to oxygen levels. Your body extremities (feet, hands, nose etc.) will feel it most and -6 degrees could feel like -20 degree!

The chart below demonstrates the average monthly temperature across all 4 climate zones on Kilimanajaro. 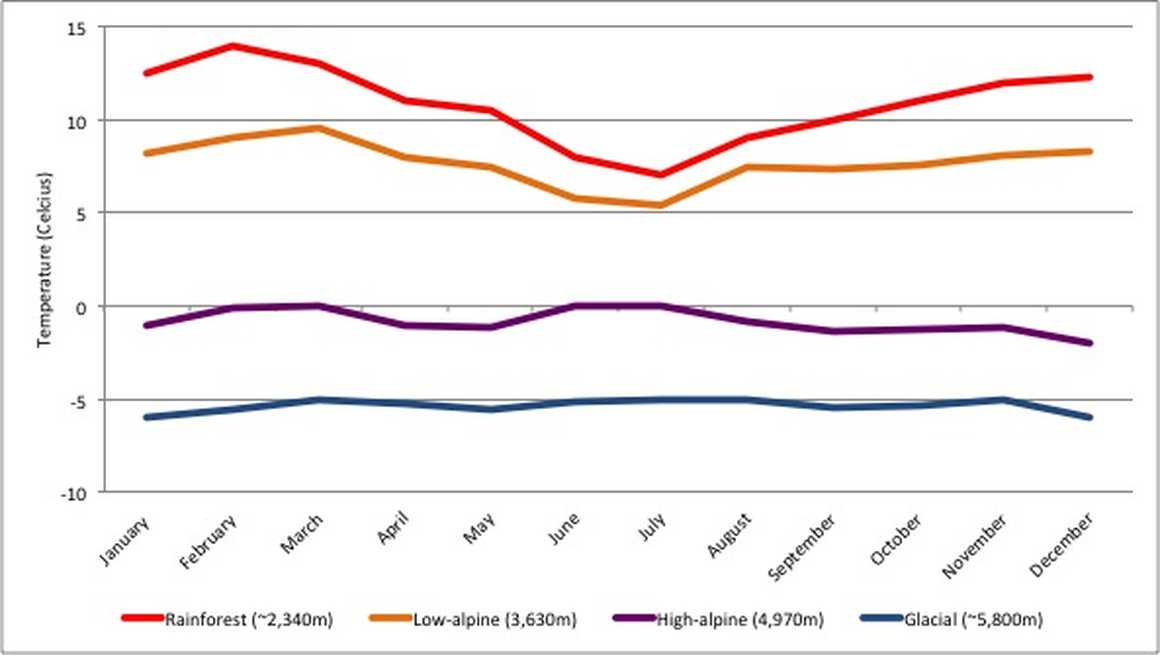 Check out www.mountain-forecast.com for a comprehensive 9 day weather forecast for Kilimanjaro.

START YOUR KILIMANJARO ADVENTURE
Follow us on
Trustpilot
Newsletter