OK, here’s today’s ‘starter for ten’: what links famous singers Lady Gaga, Willie Nelson and Cheryl Cole (or whatever she’s called nowadays), film stars Chris Hemsworth and Jack Black, and reality TV star Kylie Jenner? Yep, you got it; at some time or other they’ve all fallen foul of altitude sickness (also known as Acute Mountain Sickness or AMS).  In Lady Gaga’s case it was quite serious, and was not simply the result of pulling on a pair of outrageously high platform boots.
There are two points we can draw from this; firstly, altitude sickness is indiscriminate – if rich and famous folk can succumb, so can you and I. Secondly, if ignored altitude sickness can very quickly turn from a jumble of hangover-like symptoms into something considerably more dangerous.
If you’re planning to trek Mount Kilimanjaro in Tanzania, you’ve got to plan for the possibility of altitude sickness. In fact, it was on a charity climb of Kilimanjaro for Comic Relief in 2009 that Cheryl wots-her-face, Chris Moyles, Gary Barlow, Ronan Keating and several other celebs were laid low by the condition.

It is also worth reading the guide about how to take care of yourself on Kilimanjaro. 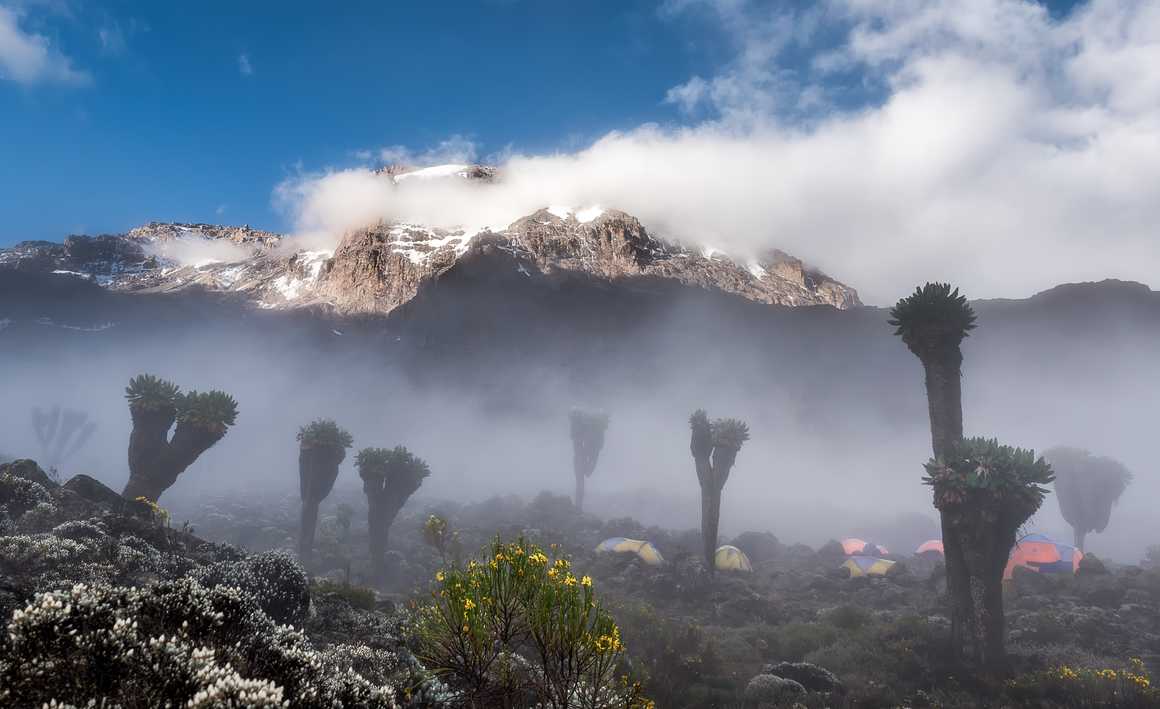 Before I get onto preventing – or at least effectively preparing and managing – altitude sickness on Kilimanjaro, I just want to run a bit more info past you on what it’s all about in the first place. It’s worth it, I promise.

What causes altitude sickness and who does it affect?

OK, pay attention; here’s the science-y bit, although I’ll try to keep it simple. When you climb Mount Kilimanjaro, the higher you go the less dense the air around you becomes. Oxygen molecules in the air that were fairly tightly packed together at ground level become more and more dispersed as you gain altitude.
With less oxygen available to you in each breath as you climb, your body begins to respond in different ways in order to compensate, so, for example, you’re likely to start breathing more quickly and more deeply even when you’re resting.
Most folk, once they climb to a height of around 3,000 metres (approx. 10,000 feet) will start to feel some effects of altitude although in a some cases symptoms can begin showing at around 2,500 metres (that’s about 8,200 feet).
The most common cause of altitude sickness is climbing to high altitude to quickly for your body to adjust and cope with the change in air density and the reduced availability of oxygen. This can lead to the kind of symptoms you’d normally associate with a heavy night out on the lash: i.e. tiredness, dizziness, headache, nausea and/or vomiting, loss of appetite and shortness of breath.
As for who altitude sickness affects… well, it’s pot luck really. Your age and gender have no bearing on whether or not you’ll suffer from altitude sickness or how severe your symptoms may be. Getting yourself fit and healthy in advance of your trek up Kilimanjaro will certainly help (more about this in a moment) but it doesn’t guarantee that you might not go a bit wibbly from altitude sickness.
The most important thing to remember is that if you start to feel even slightly odd or unwell, or show one or more of the symptoms, tell your trek leader or guide about it asap. Ignoring the signs of altitude sickness because you’re worried it’ll stop you summiting Kilimanjaro is not an option. Why? I’m glad you asked. In a nutshell, if you have a bad case of altitude sickness it’s best to go downhill fast (to a lower altitude), rather than go downhill fast (health-wise) and end up with potentially life-threatening complications.

It’s a fair bet that you’ll experience some of the common minor symptoms of altitude sickness when you make your ascent of Mount Kilimanjaro. Typically these can be treated with little more than everyday painkillers and by maintaining your fluid intake (avoiding dehydration is important when you’re trekking, and even more so when you’re likely to be out in the African sun).
The problems start if minor symptoms become moderate symptoms; that’s when altitude sickness can turn nastier than a gremlin that’s been fed after midnight. Moderate symptoms of altitude sickness include:  severe headaches that painkillers won’t touch, debilitating weakness and fatigue, loss of co-ordination and persistent nausea or vomiting. Continuing to ascend Kilimanjaro when you’re displaying these symptoms could seriously mean curtains for you; it’s time to head down to a lower altitude and get medical help.
Now the last thing I want to do is put a downer on your big Kilimanjaro trekking adventure, so it’s worth mentioning that serious complications are not common, but it’s best that you know a bit about them. If altitude sickness hits you really badly on Kilimanjaro it could possibly lead to complications known as High Altitude Cerebral Edema (HACE) or High Altitude Pulmonary Edema (HAPE).
Both caused by the unwanted build-up of fluid in the body (HACE in the skull cavity, causing pressure on the brain, HAPE in the lungs) these conditions are bad news central and require a rapid descent from the mountain and emergency medical treatment. Someone suffering from HACE may: have a severe and untreatable headache; be hallucinating; be confused or disorientated; lose their memory or co-ordination and may ultimately lose consciousness or fall into a coma. And this stuff can happen fast.
The effect of fluid on the lungs that happens with HAPE inhibits the exchange of oxygen into the bloodstream – a major problem at high altitude. HAPE sufferers may: be continually very short of breath, experience a ‘tight chest’ or a feeling of suffocation, cough up a white or pink froth and be fatigued, weak, confused or irrational.

Right – that’s enough about altitude sickness itself. Let’s move onto what you came here for in the first place… 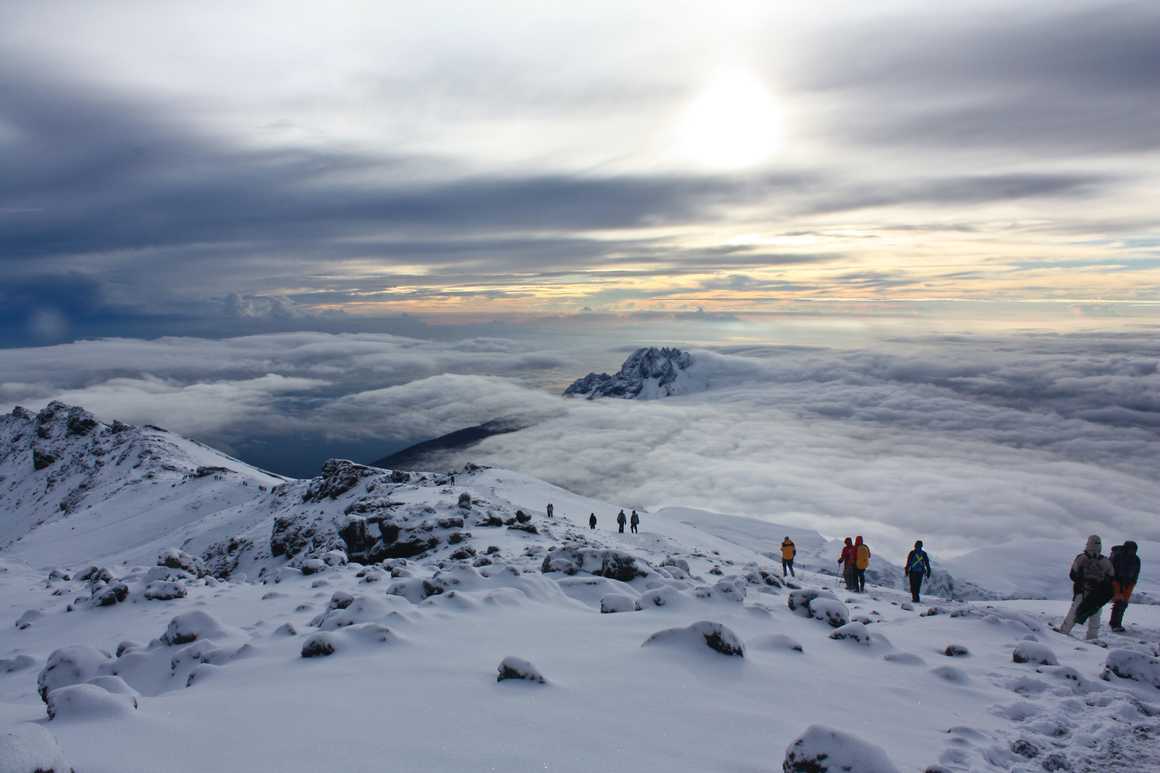 Protecting yourself against altitude sickness on Mount Kilimanjaro

Trekking Mount Kilimanjaro should and can be one of the greatest experiences you’ll ever have; it really is that good. But the big deal with climbing Kilimanjaro is that you can gain a lot of altitude in a comparatively short space of time. That doesn’t mean that your adventure is doomed to failure because of altitude sickness: far from it. The right combination of preparations and precautions will see you admiring the spectacular views from the top of Africa’s highest mountain, (hopefully) laughing in the face of altitude sickness and wondering what all the fuss was about.

As I said earlier, getting yourself physically fit is a good step towards preventing altitude sickness in the first place. Cardiovascular activity is key as this will strengthen your heart, improve lung performance and better facilitate the transport of oxygen around your body via the bloodstream. Begin regularly cycling, swimming, running, power walking or whatever else floats your exercise boat five or six months before you’re due to trek Mount Kilimanjaro and stick at it until you’re as healthy as a healthy thing and you’ll be golden. Or possibly red and sweaty.

Take time to acclimatise to higher altitudes. That’s so important, I’ll say it again. Take time to acclimatise to higher altitudes. Your body needs time to adapt to higher altitude; go too high too quickly and you’re a shoo-in for altitude sickness. Chill for a few days before your trek; gradually acquaint yourself with lower levels of oxygen in the atmosphere. If you have the time to spare, opt for a trekking route that takes a little longer and is a little more forgiving on your system such at the Machame Route or the Lemosho Route, both of which take a week or so to complete.

For a few nights before the trek itself, cut out the booze and/or ciggies (plenty of time for these after the trek when you’re celebrating your amazing achievement) and get some good sleep. And when you’re actually trekking, don’t go at it hammer and tongs and knacker yourself out unnecessarily; there’s no need to rush and taking it steadily means you’ll have more time to appreciate some of the most  gob-smackingly gorgeous trek scenery on the planet.

Tanzania is apt to be hot and sunny, so dress appropriately for the conditions during the day, wear wide-brimmed sun hat or a baseball cap with a brim to protect your head and make sure you drink enough water or juice. All the time. Even if you think you’ve drunk enough, you probably haven’t drunk enough. And since the symptoms of dehydration aren’t so far removed from those of mild altitude sickness, why take the risk of getting kicked off the mountain simply because you hadn’t, er, drunk enough?

Lastly, there are medicines that you can bring to help you deal with the symptoms of altitude sickness. Basic painkillers (paracetamol, ibuprofen) can take care of low-level headaches and relieve basic aches and pains, while the drug Acetazolamide (brand name Diamox) is widely considered to be effective in managing altitude sickness as a whole. A couple of things to be aware of though; Acetazolamide has side effects for some folk – it can cause disturbed sleep, pins and needles and is also inclined to make you pee more often than you normally would. Oh, and it reportedly makes fizzy drinks taste peculiar or disgusting depending on your palate.

To sum up then?

Shame on you if you’ve skipped the fabulous info above to get to this summary. Oh well, it’s your loss. Anyway, here’s the skinny: altitude sickness is a fact of high-altitude trekking life. It’s not particularly pleasant, it can turn downright evil if ignored, but it can be minimised and managed so long as you take appropriate precautions and keep yourself fit. Most importantly, altitude sickness really isn’t a suitable excuse to deny yourself the most extraordinary and unforgettable trekking experience on Mount Kilimanjaro. And you know it.
Follow us on
Trustpilot
Newsletter