Nestled deep within the Western Himalayas is a land literally lost in time - Bhutan. Often regarded as one of the happiest places on earth, Bhutan is an extraordinary mix of stunning landscapes and cultural heritage.

The land of thundering dragon has drawn tourists for years and continues to delight, inspire and amaze every single person who crosses her beautiful borders.

To help you get the most out of your journey, we have listed below what we consider to be the best places to visit in Bhutan.  If you would like to join one of our Bhutan tours, click here, or contact one of our Destination Specialists.

You can also check how's look comparison of Bhutan and Nepal. 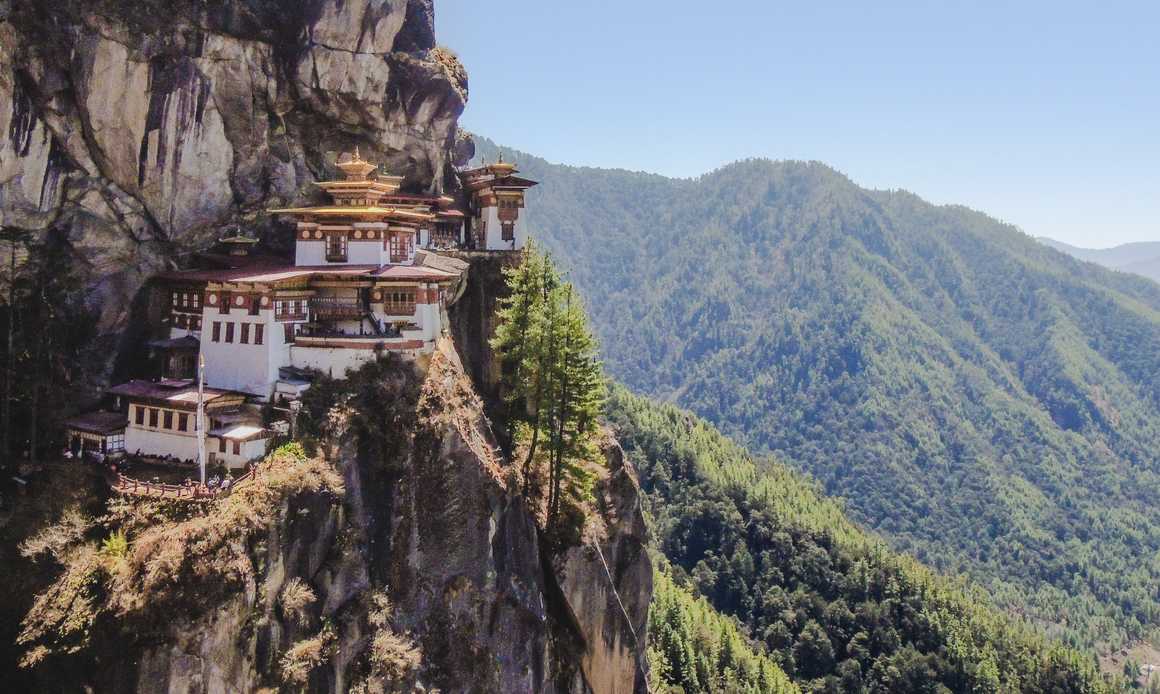 Taktstang Monastery, also known as the Tiger's Nest, is generally at the top of any Bhutan visitors list. The picture alone explains why. Built first in 1692, the Tiger's Nest is located north of Paro town high up in the cliffs. The monastery is closely linked with Guru Padmasambhava who is widely regarded as the person who introduced Buddhism to Bhutan. It is believed that Guru Padmasambhavat, in the 8th century, flew to this location on the back of a tigress and defeated of a demon. Guru Padmasambhava is then said to have meditated in a nearby cave for three months before finally emerging in eight incarnated forms or manifestations and blessing the site. This is how the monastery acquired the name 'Tiger's Nest'. The 2,000 foot climb to the monastery is an experience in itself. The views are worth every step you climb to reach the temple though! Once in the temple you will witness beautiful architecture and be simply stunned (and possibly alarmed) at the structure's cliff-side location.

Officially called Punthang Dechen Phodrang (Palace of Great Bliss), Punakha Dzong was built in 1637 by Zhabdrung. The Dzong is full of history and still holds the mummified body of its founder - Zhabdrung. Punakha Dzong also played host to Ugyen Wangchuck, Bhutan's first king, who was officially crowned here on December 17th, 1907. The building stands at an altitude of 4430 feet above sea level and was once the winter capital of Bhutan. Even today the Dzong is the winter home for Bhutan’s spiritual leader and the monks of Paro and Thimphu. Tourists are able to visit the incredibly large and spectacular Kuenrey (assembly hall) within the site and enjoy the rural tranquillity of the area. 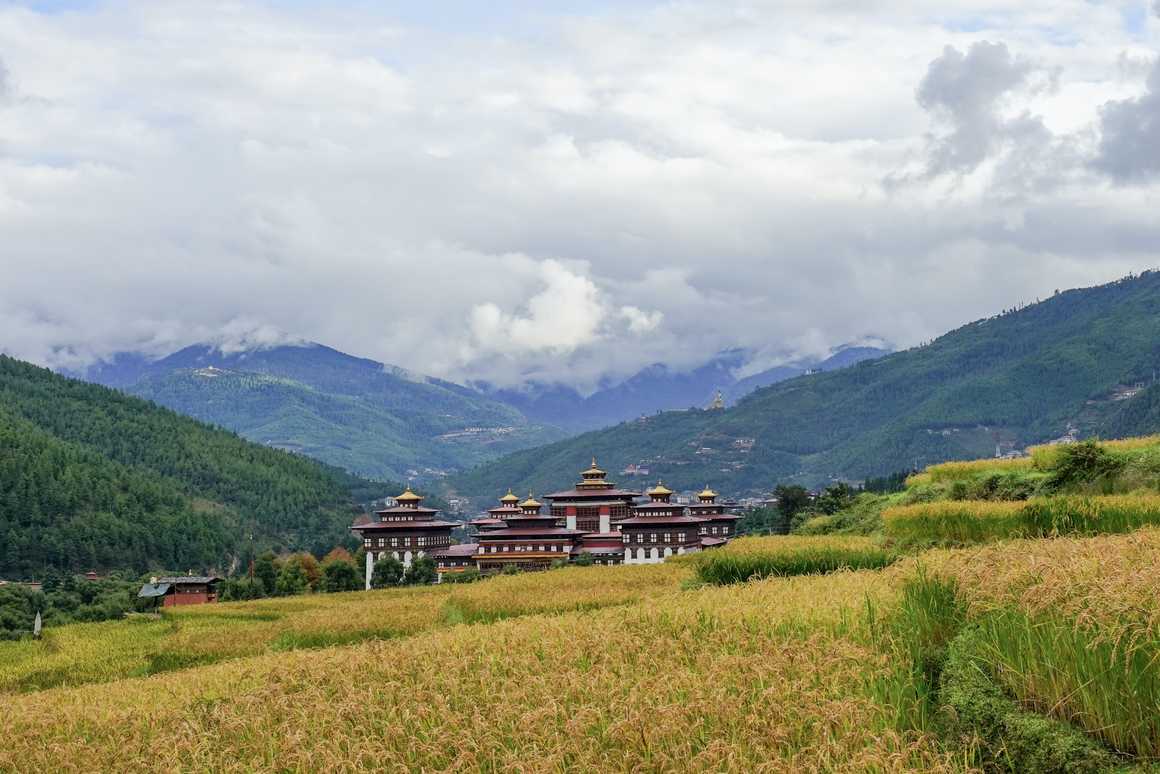 Thimphu is the capital city of Bhutan and the revered seat of Bhutan's monarchy. Thimphu is the only capital city in the world to not have any traffic lights. You certainly won't hear horns and drivers shouting in Thimphu! The city is surrounded by mountains and has a small population of only 20,000. The small size and population of the city gives it an extremely peaceful feel that is only matched by the local’s friendliness. Thimphu has an old-world charm about it that is difficult to describe to outsiders, the city is a must for travellers who want to experience Bhutan culture at its fullest.

Dochu La Pass is located just 30 kilometres from Bhutan's Capital City of Thimphu. It is one of the most visited passes in the country as travellers driving to and fro from Punakha and Wandgi need to cross over it. Standing at 3150 metres above sea level, the pass is often clouded over, however, on clear days Dochu La Pass offers unrivalled views across the Himalaya region. Trekkers heading into central Bhutan from Thimphu should definitely make a stop there and take in a coffee at the local shop and enjoy the many Buddhist prayer flags fluttering in the fresh mountain breeze.

Paro is one of the most attractive towns in Bhutan and contains a wide variety of historical sites. The town itself is set within a gorgeous valley of lush green rice fields in which you can wander for the day. Two must see sites within Paro are Rinpung Dzong and the National Museum of Paro. Rinpung Dzong is one of Bhutan's finest Buddhist monastery examples and is now the administrative and monastic centre of the western region. It also houses a fine collection of local festival masks. The National Museum of Paro is the ideal starting point to explore some of the regions culture and history. The museum exhibits rich stamp collections, Thangka paintings, slate carvings, prehistoric pieces, jewellery, traditional weapons and other Bhutanese cultural artefacts.

Both Phobjika and Gangtey Valley are must see locations on any Bhutan itinerary list, particularly for nature lovers. Gangtey Valley is a superb glacial valley located on the north western tip of the Black Mountain Range. The area is one of the prettiest in all of Bhutan and particularly important as it is host to one of the most endangered species of bird - the black-necked crane. Black-necked cranes migrate to this valley each year in winter from their northern habitats in Siberia and Tibet. These elegant and very shy birds are best observed from early November to late March and locals are now working with professional bodies to help protect the species. Make sure to also visit the fabulous Gangtey monastery when you’re in the area!

Thimphu's National Memorial Chorten is both a temple and chorten rolled into one and is one of the most popular places to visit in the city. The building stands in the middle of the main road towards the south entrance and traffic is divided and diverted around it. The chorten was constructed in 1974 to honour the 3rd king. The 3rd king wished to build a chorten that would represent the mind of Buddha, however, the 3rd king died before the building was constructed.

Drukgyel Dzong tells the fascinating history of how Bhutanese warriors defended the country against northern invaders in the 17th century. Constructed by Zhabdrung Ngawang Namgyal in 1646, the Dzong was built to commemorate the victory over Tibetan invaders. Sadly, the monastery was almost entirely destroyed by fire in 1951. However, the outer wall and main tower remain and still succeed in being an imposing sight. On clear days you will get unrivalled views of Mt. Jumolhari on the approach road to the monastery.

Tashichho Dzong is both a Buddhist monastery and fortress combined that is located on the northern edge of Thimphu city on the bank of the Wang Chu river. The fortress has traditionally been the home of Druk desi (or 'Dharma Raja'), the head of the Bhutanese civil government. The monastery is also the home of Bhutan's spiritual leaders during the summer and hosts the Thimphu festival in the autumn. The building is historically important as it was built by Dharma Raja, who founded the Lho-Drukpa sect of Buddhism, a sect that now defines Bhutan Buddhism. 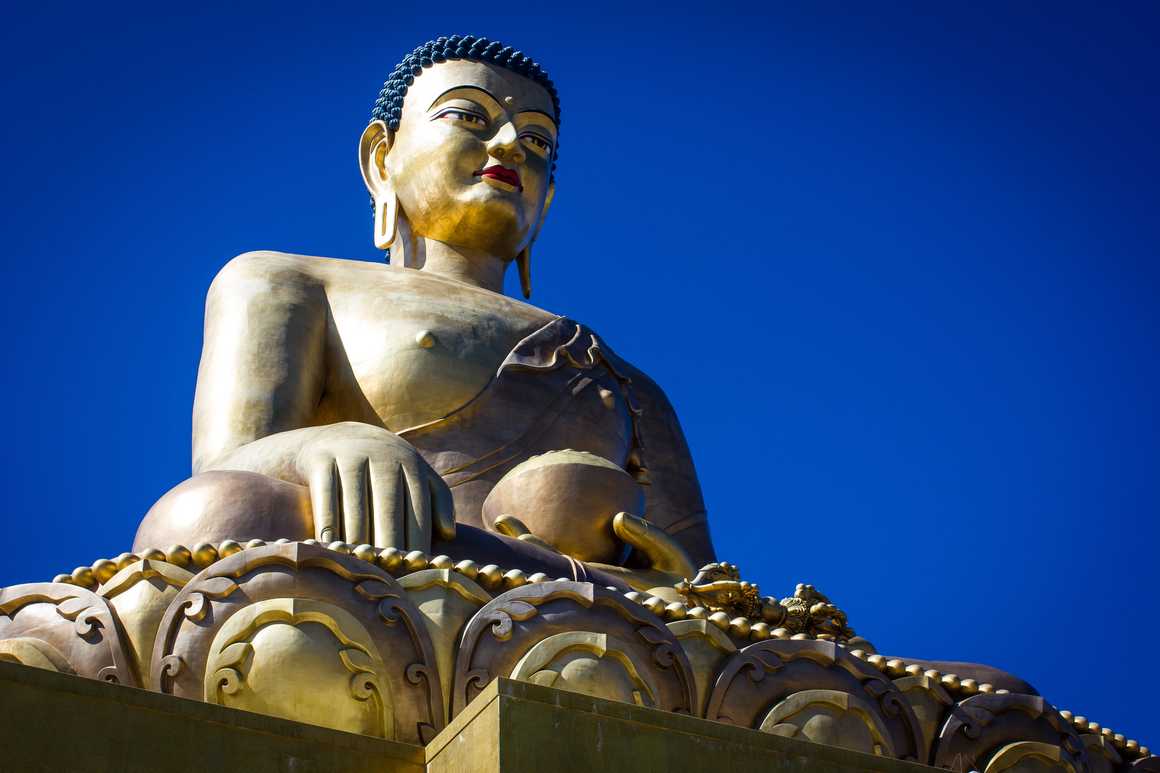 The Buddha Dordenma was finally completed in 2015 at a cost of well over a hundred million dollars US. The gigantic bronze statue stands at 169 feet (51.5 meters) and is gilded entirely in gold. Within the statue itself stands over a hundred and twenty five thousand smaller Buddha statues, all of which are made of bronze and gilded in gold. The Buddha Dordenma is located within the ancient ruins of Kuensel Phodrang, home to the thirteenth Dresi Druk, Sherab Wangchuk. The statue sits on the summit of a hill with stunning views overlooking the Thimphu valley and is a must for any Bhutan visitor!

View our treks in Bhutan
Follow us on
Trustpilot
Newsletter