Prince Harry has been in Nepal for the past three days paying tribute to the incredible resilience of the Nepali people in recovering from last year's Earthquakes. His visit comes as Nepal prepares to mark the first anniversary of the April 25th earthquake that killed more than 8,000 people.

Speaking at a government reception in the capital, Kathmandu, the prince recounted stories of his mother and father's separate journeys to Nepal.

Following in his parents footsteps

Prince Charles visited Nepal in the 1980s, undertaking a short trek in the Annapurna region, which would later be named after him as the Royal Trek. Princess Diana toured Nepal in 1993, shortly after her separation from Charles. Harry has hinted that he plans to follow in her footsteps whilst in the country.

Addressing a group of assembled dignitaries, the Prince said: "I'm sure you hear this all the time, but your country holds a special place in the imagination for so many people. I pay my respects to those who perished and hope to do what I can to shine a spotlight on the resilience of the Nepali people".

Throughout his speech the Prince spoke Nepalese, addressing the people with "Namaste" (hello) and often finishing sentences with "Dhanyabad" (thank you).

So far Harry has visited a number of cultural sites in Kathmandu, including the UNESCO World Heritage Site, Patan Durbar Square, which was badly damaged in the quake. He took some time to sit with restoration workers and try his hand at wood-carving with traditional tools. 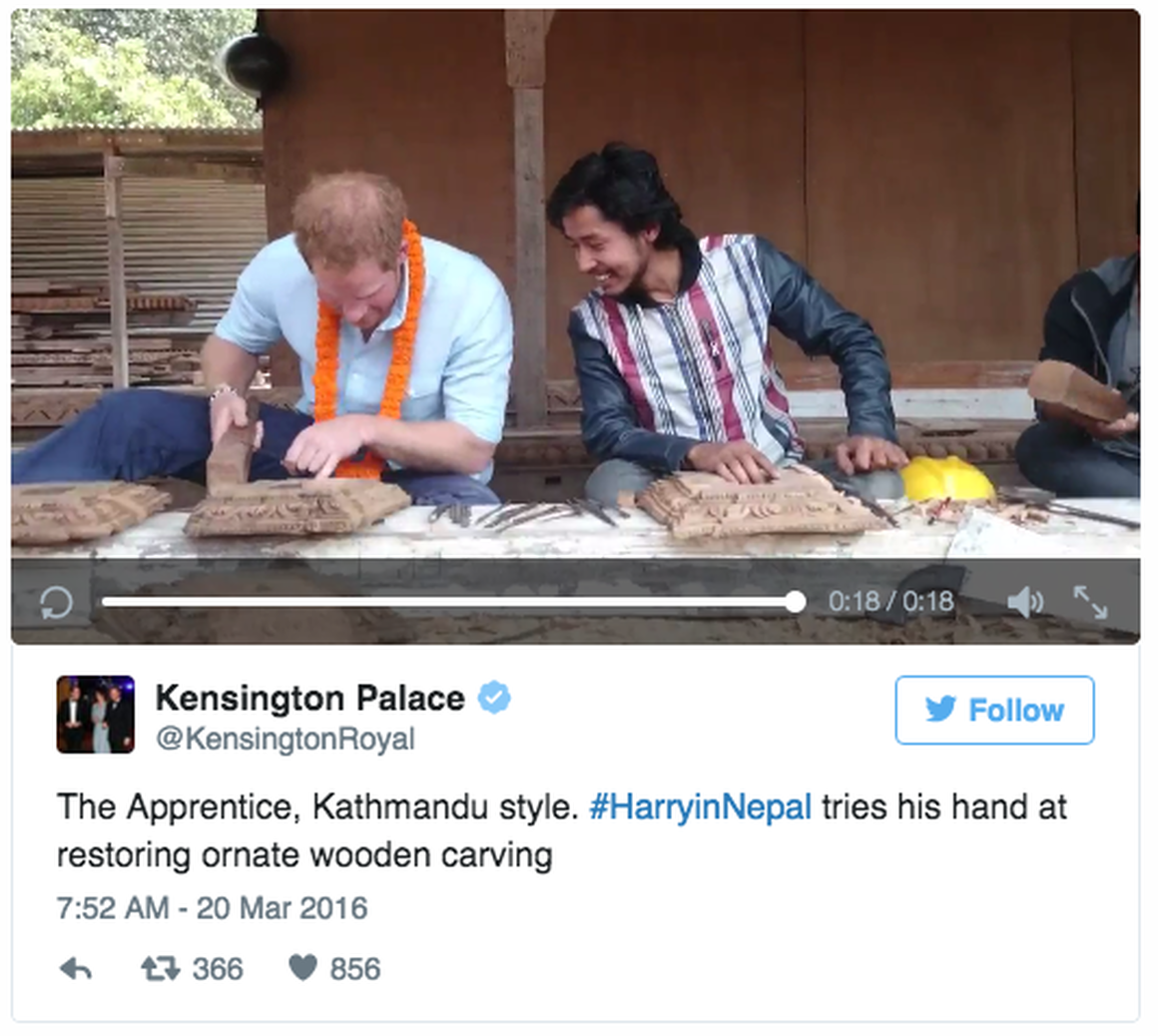 He has also visited a temporary camp for displaced families and children. A young teenager gave him a full tour of the camp, where over 250 people now live, having been made homeless by the quake. 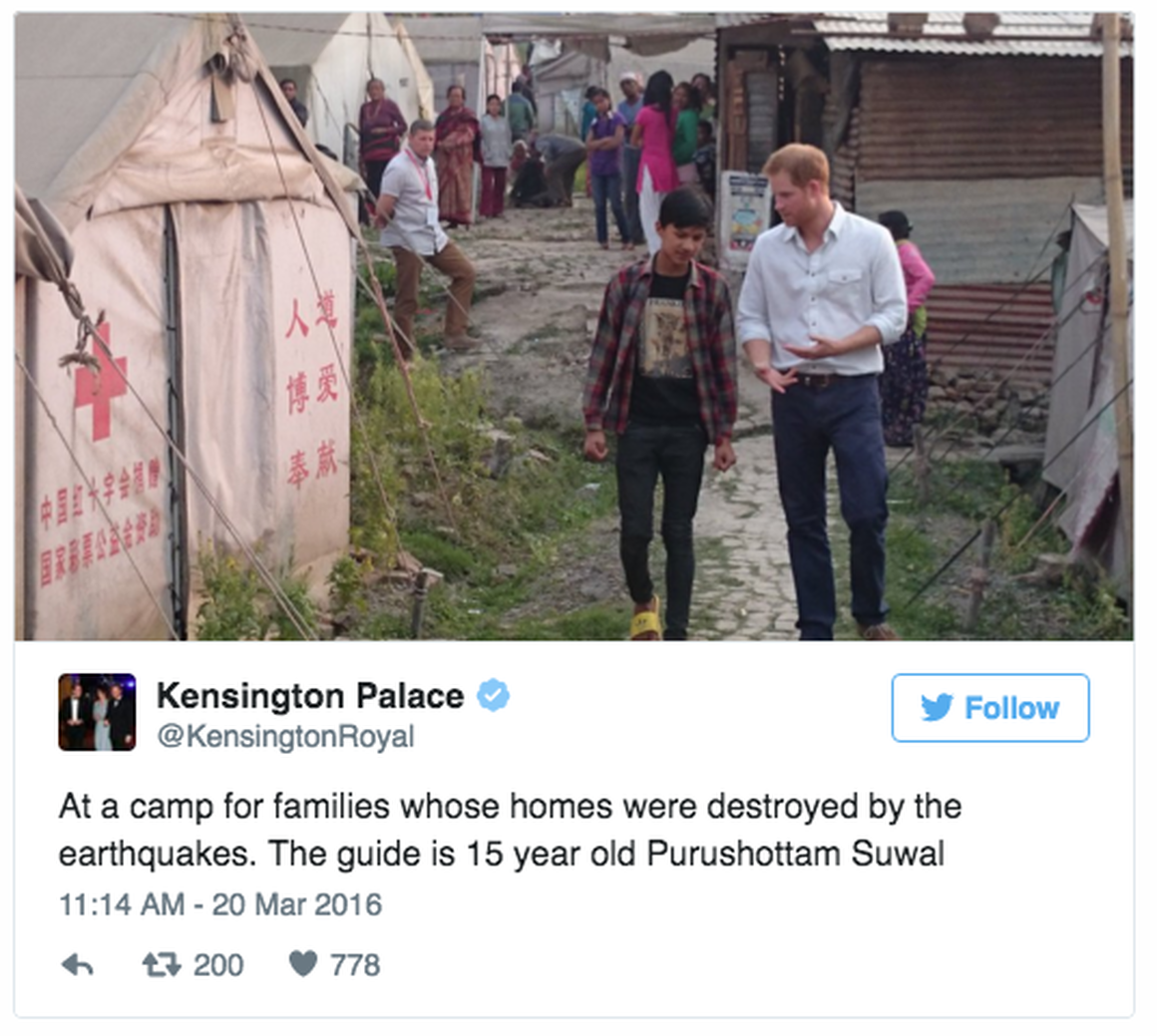 Yesterday, the prince held talks with Nepal's first female president, Bidya Devi Bhandari. The United Kingdom has been one of the largest donors to Nepal. According to figures released by the Department for International Development (DFID), a total commitment of ?70 million in earthquake relief has been deployed to the small Himalayan state. The relief has been used to shelter over 250,000 people who have been displaced by the quake. 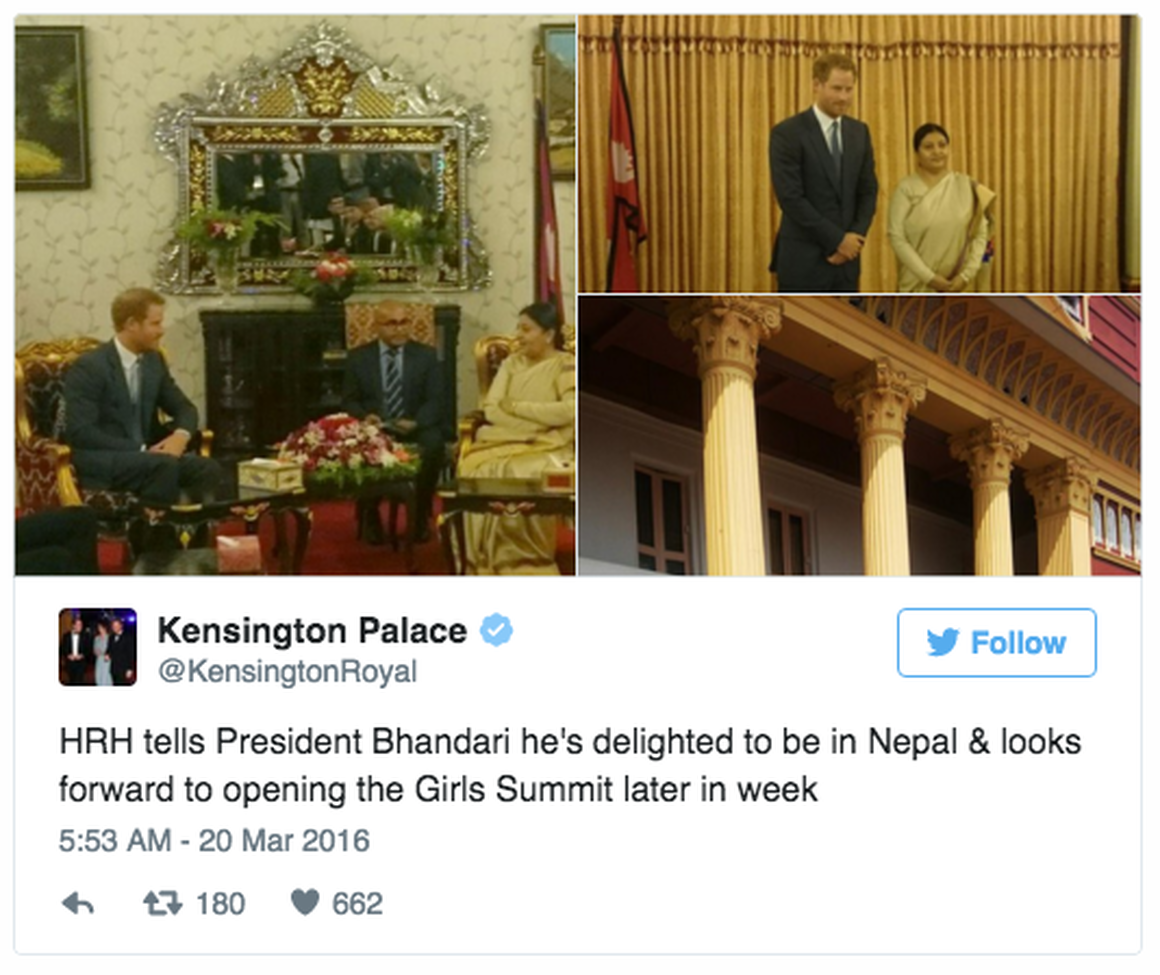 The prince has also paid personal tribute to the Nepalese Gurkhas, who last year celebrated their bicentenary since they were first recruited into the British Armer Forces. Gurkhas have served in every major conflict involving the British military for two centuries. Harry spoke of his time serving with Gurkha soldiers in Afghanistan in 2008, saying he had "such a huge amount of respect for Gurkha soldiers." 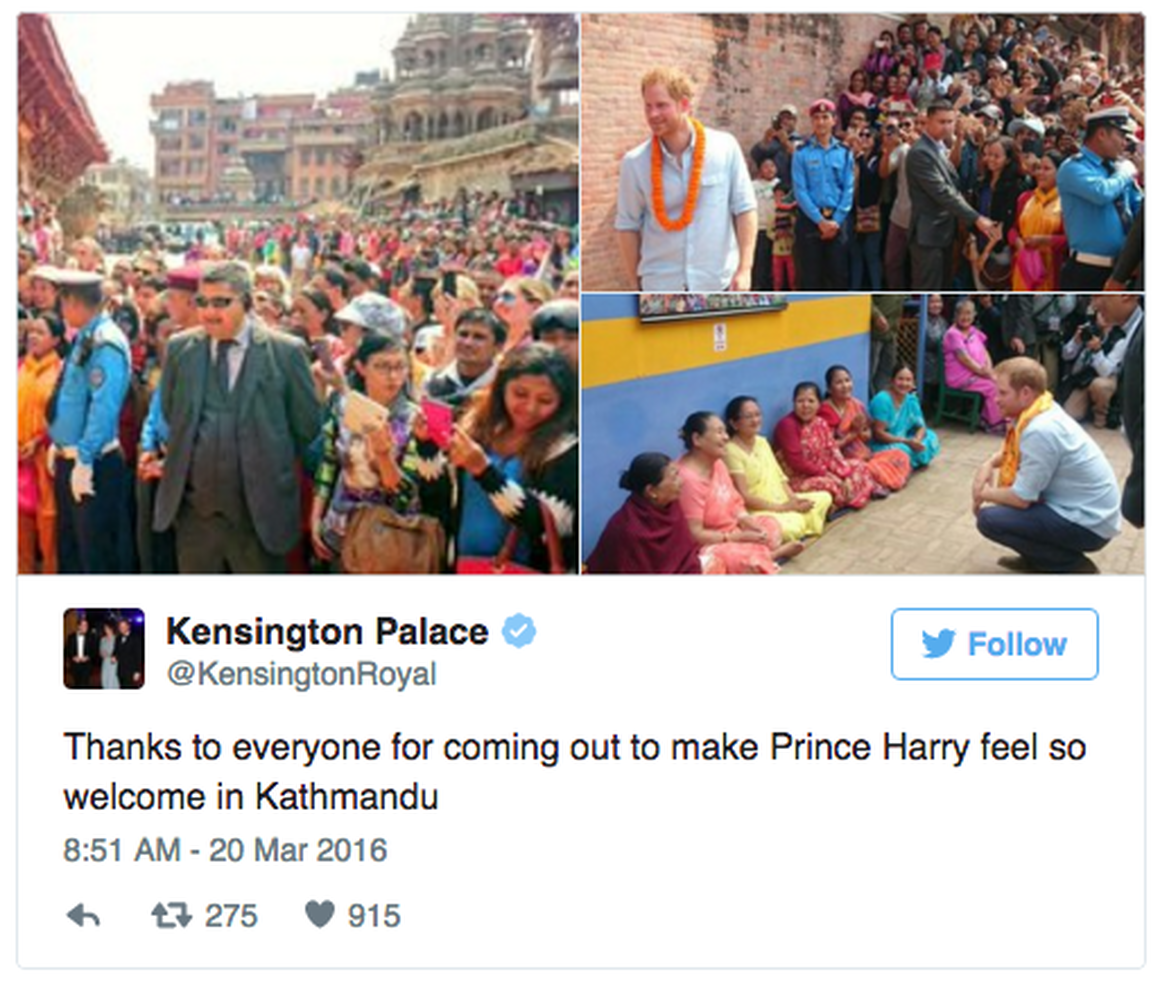 The prince is currently on safari at Bardia National Park where is plans to raise the profile of the conservation programmes in Nepal. Harry has a passion for animal conservation and was particularly impressed with the work done at Bardia, where conservation programmes targeting poaching have led to tiger populations increasing from 18 in 2009 to more than 50 today. Tigers are worth around $US20,000 (?14,000) on the black market while the average monthly wage in the region is US$150 do (?104).

The Prince's visit so far has really cast a wonderful light on this incredible mountain country, and more importantly, highlighted the amazing speed of recovery since last years quake. But what we have found most revealing is the amazing warmth and welcoming nature of the Nepalese people, a fact that is so self-evident when one visits the country.