The time zone in Morocco in GMT +1

Arabic is the official language but French is often used in business, government, and diplomacy. The majority of Moroccans speak French. Berber is now recognised as a culture and language in its own right. There are also many Berber dialects.

The local currency is the Moroccan Dirham (MAD).  For the most up to date exchange rate please visit www.xe.com.
USD
MAD

It is difficult to supply reliable weather statistics for the High Atlas as the range covers such a vast area and reaches altitudes of over 4000m. Cooler temperatures are likely to be experienced in the more northerly areas of the Mountains, mainly due to the western winds that blow from the Atlantic. Towards the south of the range, the weather is more influenced by the Sahara Desert offering drier, warmer climates no matter what time of year it is.  The highest peaks like Toubkal will remain covered in snow from the months of November through to the start of June, and sometimes remain snow-capped all year long.

The main trekking season in the High Atlas in between April and October. We operate our trips between June and October when the snows have receded and the mules, we use to carry our gear, are able to cross the high passes safely. If you are looking for bright and sunny days around 30˚C with a low chance of rain then consider July and August for your trip. If you would prefer the temperature a little lower then consider June, September or October. Please bear in mind that afternoon thunder storms and heavy rain can occur at any time through out the summer months.

Remember that Morocco can see a temperature difference of up to 15˚C between the mountains and lower lying cities. This means when the High Atlas are a comfortable 25˚C, Marrakesh could be in the 40s.

Our winter climbs take place in January and February when the peaks provide the best conditions for a challenging ascent with crampons and ice axe. Daytime temperatures in winter will be between 10˚C and 20˚C but well below freezing at night.

Some people prefer not to travel to Morocco during Ramadan. Some businesses may be closed at this time and you should be respectful of cultural rules around fasting and sensitive to the fact that most people will not be allowed to eat or drink anything during daylight hours. In 2021 Ramadan will fall in April / May so will not affect any of our scheduled departures.

And last, but by no means least, when you are planning your trip check out the prices of flights early. The sooner you can book, the better, as there are big seasonal variations in flight costs.

We will do everything we can to help if your luggage is lost or delayed. Be sure to check your insurance policy coverage for lost luggage cover before your hiking adventure in Morocco.

Although Morocco is more liberal than many other Muslim nations you do need to be careful when purchasing or consuming alcohol. Morocco does allow the consumption of alcohol and you can buy beer, wine and spirits in licensed hotels, bars and supermarkets. In supermarkets there will often be a separate alcohol room which is out of sight. If you attempt to purchase alcohol outside of one of these licensed areas then you may find yourself in trouble with the police.

Bars with a licence to sell alcohol will not usually have windows. This is because although it is legal to purchase and drink alcohol on the premises, you are not allowed to be seen by the general public outside. Officially only tourists are allowed to drink outside but to avoid causing any offence it is best avoided. You are allowed to bring alcohol in to the country with you, but only a maximum of 1 litre.

While in Marrakesh, if you want to have a drink with a meal, it is best to check with the restaurant if they serve alcohol before you sit down. You should also ask if they are happy for you to sit anywhere whilst drinking or if they would prefer you to sit at a corner table out of sight. While you are up in the mountains trekking, things tend to be a bit more relaxed than in the city.  However, it is best to show some consideration for your cook and porters by checking with your guide before you crack open the whisky.

Although Moroccan people are very tolerant of tourists it is always a good idea to be respectful of the local customs. We would advise female travellers to keep their knees, shoulders and stomachs covered while out in public to avoid any unwanted attention.  You need to balance this conservative style of dress with the excessive heat that you may experience in Marrakesh. A long sleeved maxi dress will keep you covered while providing some airflow to keep you cool. Long sleeve breezy button up shirts, harem trousers or jeans are also good options.

For men it is best not to walk around topless despite the heat.  Moroccan men do not tend to wear shorts, although there is certainly no problem with male tourists doing this, if you want to blend in with the locals then go for some loose fitting cotton trousers.

When you are in the mountains things are much more relaxed than in the city.  You should wear clothing that is appropriate to the conditions and the activity you are engaged in.

In the High Atlas Mountains the use of mules and muleteers (otherwise known s the Berber 4X4) is very common. The strong and sure footed mules have spent their lives up here in the mountains and they can transport your gear from A to B with ease.  Mules are a big source of income for the local Berber people, as a result they are generally treated with great respect and consideration for their well being.  However there are always exceptions and in some cases mules in the High Atlas have experienced terrible neglect and cruelty.

The main problems that cause suffering for mules are:

Kandoo Adventures are committed to ensuring that the mules we use on our treks receive only the very best treatment.

To ensure the animals are never overloaded we have placed restrictions on the weight of the luggage you can bring with you.  Your main bag must always be flexible and not weigh more than 15kg.  The maximum load a mule can carry is 80kg, this will ensure the health and comfort of the mule as well as a sustainable working life.  We will not start trekking with mules who are obviously lame, sick or wounded.  We will never condone the use of traditional bits which can cause terrible pain for the animals.  We only work with a select number of muleteers who we know and trust to provide the very best level of care to their animals. 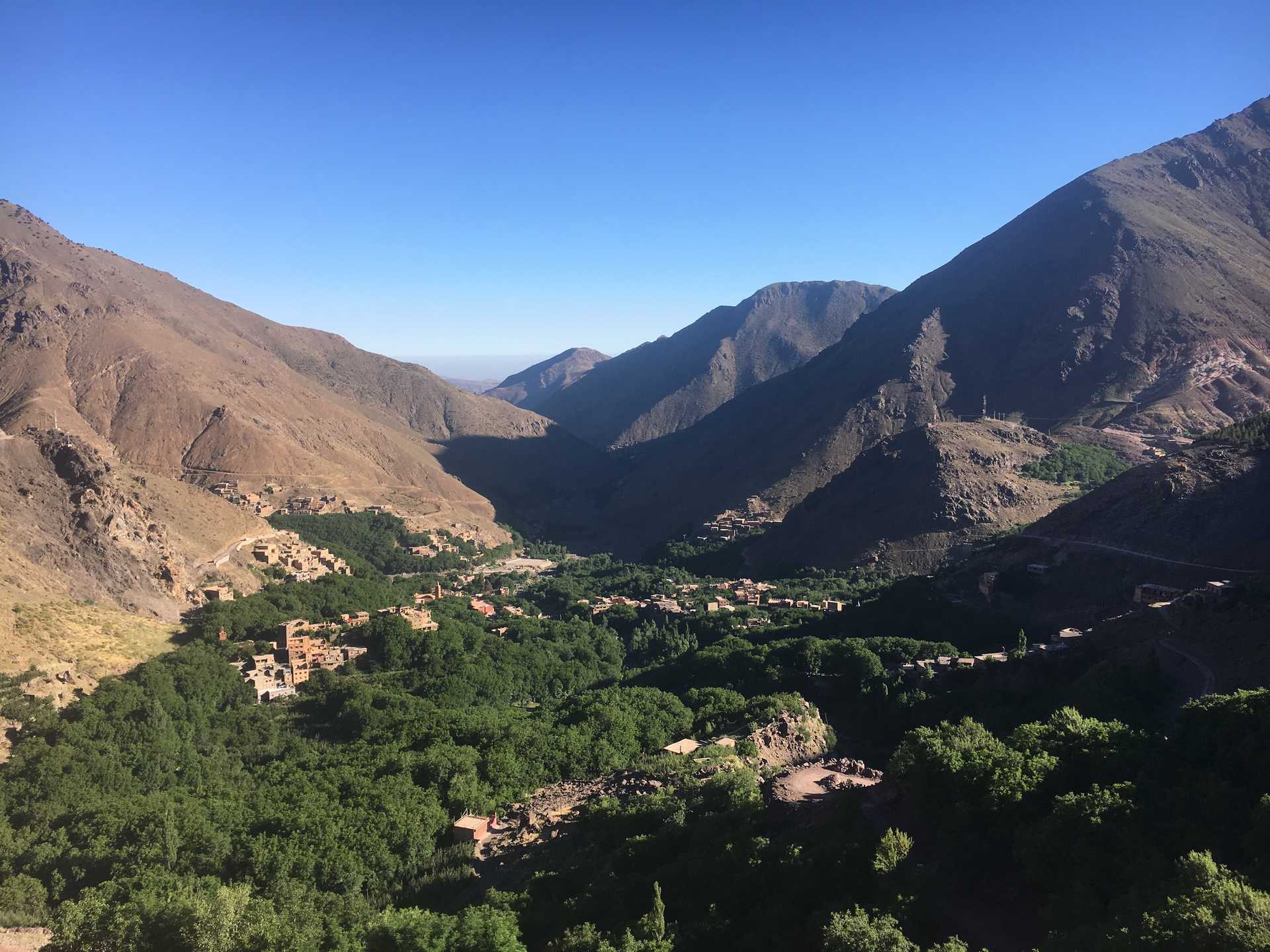 Morocco is bordered by the Mediterranean Sea to the north, the Atlantic Ocean to the west and the vast Sahara to the east and south making it relatively isolated from the rest of the continent. In the far north of the country are the Rif Mountains with a high point of 3290m. This system of peaks is connected with the Sierra Nevada in southern Spain. The Atlas Mountains are divided into three separate ranges, the Middle Atlas in the north, High Atlas running through the centre of the country and the Anti-Atlas in the south.

Over 40 different ecosystems exist in Morocco harbouring 4000 plant species and over 400 bird species. The High Atlas has the most diverse ecosystem. The slopes are home to mountain gazelle, bearded vulture, golden eagle and the highly elusive Moroccan leopard. Macaque, lynx, nocturnal genet, red fox, and polecat are common in the Anti Atlas. In the Sahara you can expect fennec, jerboa, snakes, scorpions and other insects.